In this space are the links to and perhaps a description of some interests I help support through The LeBaron Foundation. You are encouraged to look at them and consider whether they deserve your support, as well… they would benefit greatly.

There are three categories (others might support different categories… cultural for instance):

As a leading university, support will help this institution stay among the top 50 or so educational and research universities in the world. Although it has an enviably large base of support and endowment, enough is never enough when opportunities for spending are so vast. I benefited from an education, which cost a lot for my parents but which still represents less than was spent by Harvard on me. It is my responsibility to provide the same chance for others.

Two years at HBS gave me a chance to pit my business skills against a select group of my peers. The two years taught me that my values need not diminish in the quest for commercial achievement, and I learned what I could accomplish in organizing my time under pressure. I support HBS as one of my major efforts in a sense of responsibility for the chance I was given and in the expectation that HBS has a chance to be in the forefront of the new wave of management self-education using new tools.

Increasingly Harvard Business School, and others, are sharing their
educational insights on the web. Click on the button below to see HBS Working Knowledge.

My secondary school. Like many children from small towns whose goal was a top university, I sought a private school to “prepare.” Milton was gracious enough to take me for the last two years, although I had not acculturated to its standards in the earlier years. It opened my eyes to schoolmates from different backgrounds, challenged my mind, and tolerated my wandering from the prescribed path. Milton remains a top place and one that is broader now as it has adjusted with the times.

Home of complexity and the institution whose name is synonymous with adaptability, emergence and complex adaptive systems. SFI arose from the interest in broad applications of complexity, in many disciplines, by scientists from nearby Los Alamos. And now it is the closest thing to a Mecca for people wishing to see if their fields can benefit from a complexity spin. SFI has a small, dedicated hub staff directing the efforts of a small team of resident researchers. But its main function is bringing others into contact at SFI across disciplines to charge new problems.

If SFI is the Mecca, NECSI is the Franciscan Order (excuse the very crossed metaphors) going out to preach complexity. It is a virtual institute with only a cyber home, a research base largely composed of leaders in the Boston academic communities, and the energy of a passionate startup. I support the idea of complexity being applied to new problems and NECSI is vigorously selling the effort.

Clean water. Very clean water. This is the dictum around the world but never more vigorously pursued than around Lake Sunapee. The lake represents drinking water to many of the seasonal houses. This mostly volunteer organization performs watchdog and educational functions for people in the area.

It is hardly possible to run a community hospital with only 27 beds. But it serves the community and a nearby physicians’ facility. As one would expect, highly personalized care is a hallmark, but, as near as I can tell, medical standards are maintained at a high level by proximity to Dartmouth’s Mary Hitchcock Hospital and the Boston Hospitals.

Here is a picture of the school bus bought with a LeBaron Foundation grant in 2001. 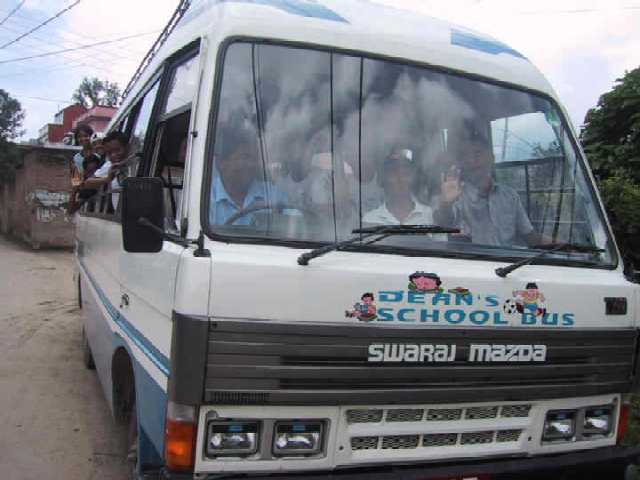 Occasionally one has an opportunity to help fund a personal devotion of an individual to the most worthy of causes. Olga Murray is spending her retirement years from the San Francisco legal world by helping – no, rescuing – the neediest of children in Katmandu. Often these are crippled girls who have no value in this society. Olga and her partner give them a home and they flourish. This is a blend of the best of causes, the best of people and the best of outcomes. I doubt if it can be institutionalized… its value may be that it is not.